CBA North News
It has been a while since our last email to you with details of our own event, but CBA North Committee have been busy behind the scenes on your behalf across, and beyond, the CBA North region. Today we start April with a similar spread announcing events this month across the region, as well as giving an update for those yet to book their place at our own CBA North event. Spring starting with a bang includes bangles as per that below. 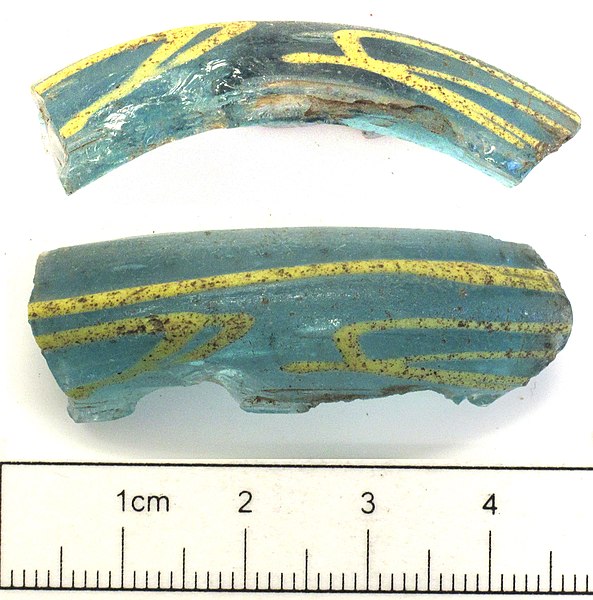 The Portable Antiquities Scheme/The Trustees of the British Museum [CC BY-SA 2.0 (http://creativecommons.org/licenses/by-sa/2.0)]After the Conference/Workshop later this month, our next event will be our AGM on Saturday, 20th May, which is also in Newcastle this year. We have a range of speakers confirmed, and still to confirm, as well as the business of the day where we’ll note some of the activities that Committee been doing for you and your local groups. Further information will be sent out regarding the AGM closer to the date – we notice many AGMs this month in our events listing below, but all are crucial to the running of groups.

If you would like to contribute any material, particular of things past you think newsworthy, please talk to a CBA North Committee member when they are out and about – we try and get out to all our local group members at some point in time throughout the year – or feel free to email us at any time.

Our last email gave you all the details for our own CBA North event on Saturday, 29th April 2017. There is still some time to book a place for you or others of your local group. Our previous post was to CBA North’s Members and Followers only, but we are keen that others should come along as well.

People do not have to be CBA National or CBA North members in order to attend.

There are short and long links that you can circulate around your group if you are having difficulties forwarding the email and sharing the blog post onwards, as well as the Forward to a Friend link in this email itself. Behind the scenes we have also changed over our website to open with details for the conference as well and this page also now, includes a Word downloadable form as well which can be found here.

The deadline for booking places remains Friday, 14th April 2017. We will send out an acknowledgement to all those who have booked places during the weekend after that date. 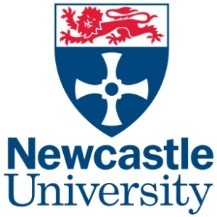 Other April Events
Also behind the scenes we’ve revised and updated our Events page on the website – this includes some changes for April events, as well as additions further ahead from September to November. This month’s list is below for you, for the others you’ll have to see our Events page.

To save overloading you with information, we’ve the posters for the two events in north Northumberland this week below. Further information will hopefully be with you this time next week.

Starting or Ending the Year with a Bang(le)?
This lecture follows the BAS AGM at Berwick tomorrow night. Glass bangles are familiar finds across CBA North’s region and have been studied since the 1930s, but little studied in depth outside of the region. This talk will illustrate what can be gleaned from the larger geographical study of one object type. 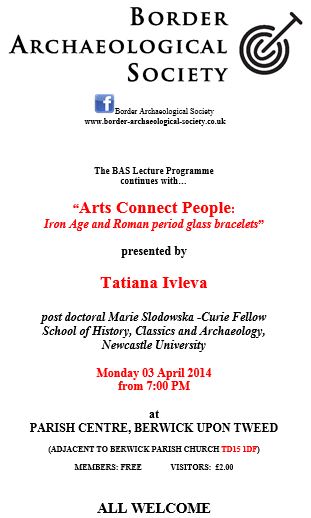 Excavations in Northumberland
Also paired with an AGM is this TillVAS lecture on Wednesday night. This lecture will be looking more at a range of sites and their excavation. 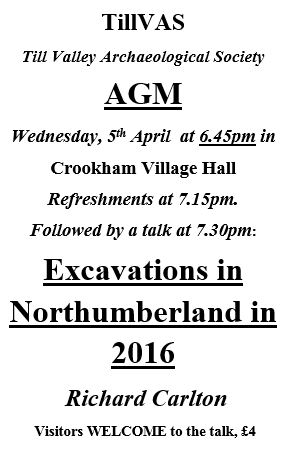