CBA North News
We covered an open day for the Roman bath house at Carlisle earlier in the month, here is some last minute news of an open day on a prehistoric site in North Tyneside tomorrow for you!

More news to come next week. 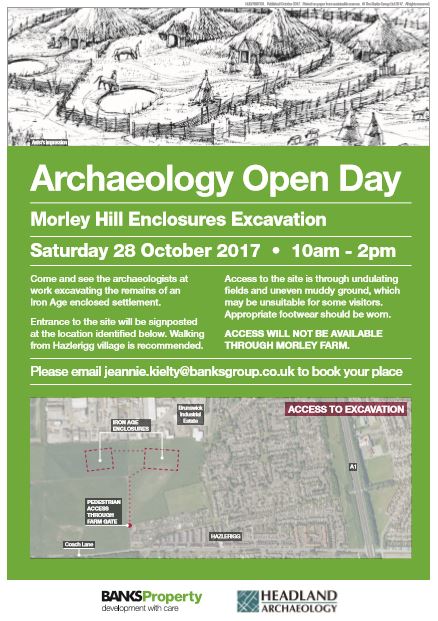 Places of Power and the Making of Early Medieval Kingdoms: New Archaeological Perspectives from Lyminge, Kent

This lecture is followed by a drinks reception at the Cafe, Palace Green Library.

Please note that places are limited and will be allocated on a first-come, first-served basis. To book a place visit:  https://www.dur.ac.uk/imems/events/seminarseries/booking/

Abstract: This paper reflects upon the results of a major scheme of excavation targeting Anglo-Saxon settlement remains preserved beneath the modern village of Lyminge, Kent, led by the University of Reading and funded by the Arts and Humanities Research Council. Encapsulating the detailed examination of a seventh-century ‘great hall’ complex and the outer zones of a documented monastic foundation, these investigations have furnished one of the richest developmental accounts of a royal centre in Anglo-Saxon England. This paper will examine Lyminge’s trajectory as an Anglo-Saxon settlement over the fifth-ninth centuries A.D. and consider its implications for wider interpretations of early medieval kingship and power.

Gabor Thomas is Associate Professor in Early Medieval Archaeology at the Department of Archaeology, University of Reading. He has varied interests in the material culture and settlement archaeology of the early medieval period and is well known both as a field director and an expert in later Anglo-Saxon and Viking-age metalwork, the subject of his PhD at UCL. Previous to Lyminge, he completed a major excavation at the later Anglo-Saxon settlement at Bishopstone, Sussex, published by the Council for British Archaeology in 2010.