CBA North News
CBA North Committee work continues full of busy – this has included bringing our Events page up to date with recent changes. Please feel free to bring to our attention any further events that you know of to send round everyone else. Apologies for the lateness in the email – there is so much happening across the CBA North region and much else we are doing for you behind the scenes.

Arch & Arch Society lecture – this afternoon
The lecture series of many of the local groups within the CBA North network started near the start of the month. Here’s a poster for something happening this afternoon if you are in the area of Durham. 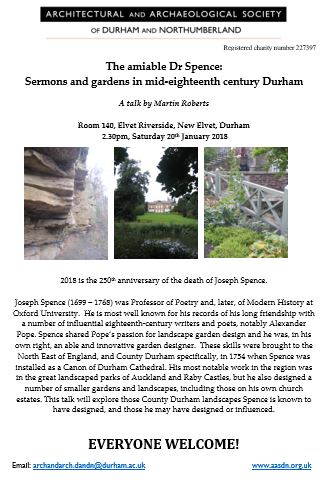 “The Society was founded in 1861 and has, since that time, pursued an active programme of lectures, field trips and publications. Based in Durham, but with interests throughout the region, it aims to provide an opportunity for all those interested in archaeology and architectural history to find out more, visit places of interest and experience hands on activities.

Annual Research Grant
The application process is open for our annual research grant, which welcomes applications for a maximum of £250 for projects based within the North-East of England.

See http://www.aasdn.org.uk/news.htm to read more about the award and how to apply. Please note that the closure date for applications has been extended to the 31st January 2018″.

Further events to come this week
Next week is another busy week to come with lectures. In Durham on Wednesday is this; 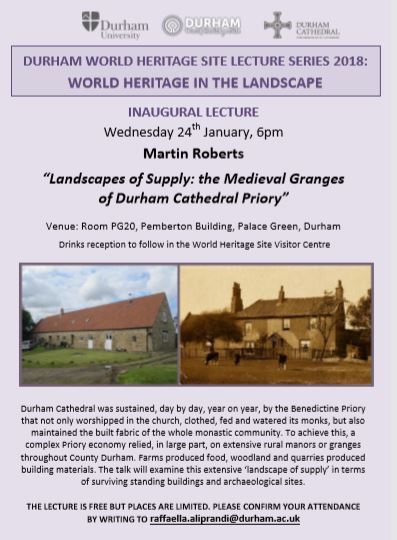 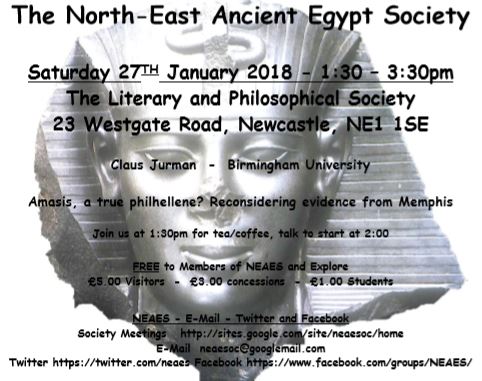 …and that of Tynedale Archaeology* in Hexham that afternoon as well. 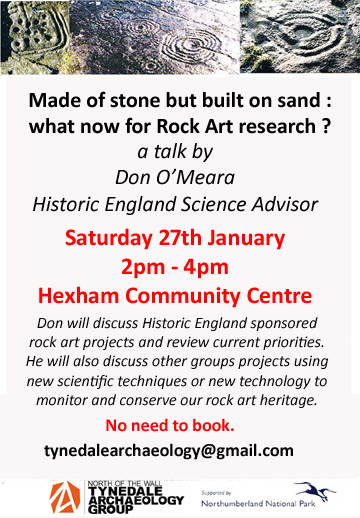 As per 2017 there is plenty to get involved in.

*Details of each local group can be found in our Local Societies and Groups website page. (Please let us know of any 2018 alterations to this page).

Our Events page updated
In case you have not already seen our Events on our website, we’ve listed something like 50 archaeological group meetings all across the CBA North region.

In case you have already looked at this page, please take a glance for the new additions from the Northumberland Archaeological Group, Teesside Archaeological Society, Tynedale Archaeology and others besides. This information is up to date as far as we know and includes the changes that we have been told of.

Please feel free to circulate this email, through the links above or through the website page, to anyone that you think might be interested in these events.

CBA North News
Some last minute news of further events this weekend that might interest you. If you would like to attend the events organised by the Northumberland National Park on Saturday and Sunday, then you’ll need to book up today. 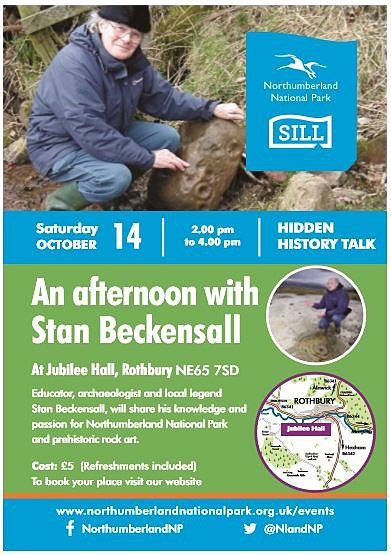 …and on Sunday there is a guided walk of Lordenshaw and Simonside. Again you will need to book up for this which you can do following this link.

The English Renaissance Herbal and its European Antecedents
On Saturday morning there is another lecture to be held by the Natural History Society of Northumbria. Marie Addyman will talk at 1030 at the Clore Suite, the Great North Museum: Hancock in Newcastle, upon at the centuries of European and English precedents which local man William Turner of Morpeth, the ‘Father of English Botany’, drew upon in his A New Herball of 1551 to 1568. 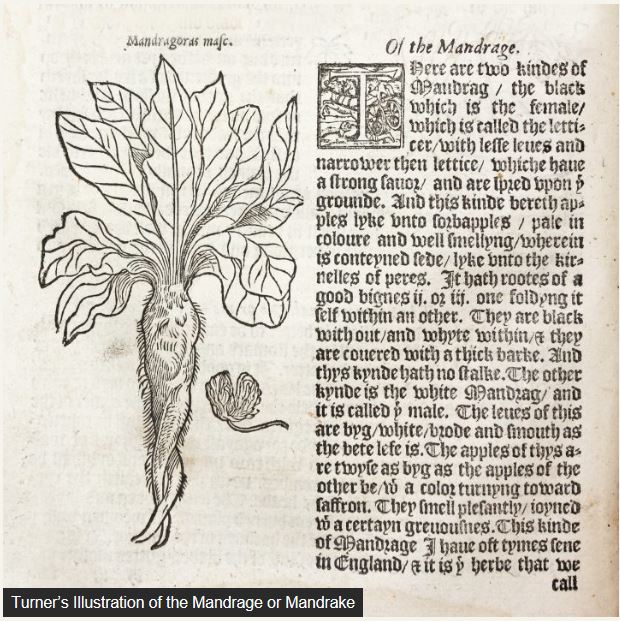 Turner’s work is considered to be the first herbal in English to give accurate descriptions of the plants listed as well as their medical uses, but he did not invent the genre. This event includes a lecture and exhibition of materials held by the society. 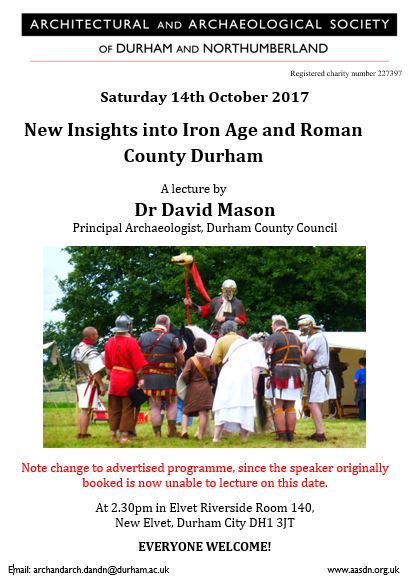 CBA North News
Our alphabet of archaeology continues with a quick pair of Updates from TillVAS and CITiZAN with news; there are also events listed for this weekend… but we aren’t going to cheat and claim the W just yet!

Our Events page on the website will continue to grow and further events that have come to us from one of our group members to us will be added soon to the page. We’ll gather these up for 2018 (please send us notice of any that you think might of interest to everyone else) and send on all the events that we know of at the start of the year for what is, traditionally, the most widely read and circulated of all our emails.

We hope to send out more news later this week with October’s many events listed.

Local group round-up: TillVAS in north Northumberland
Maureen Charlton and Heather Pentland send us another group round-up from the Till Valley Archaeological Society. Excavations have only recently finished at this site, so this – outside of the local parish magazine – is the first news of this excavation outside the area. 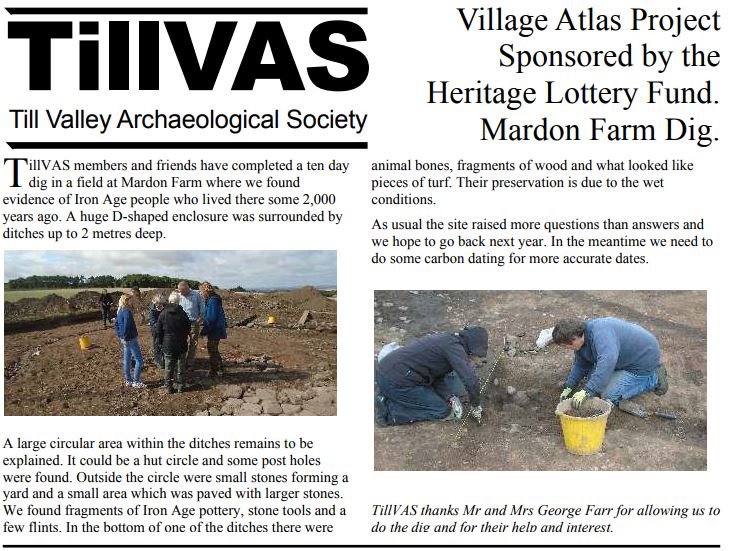 They also note the next TillVAS event – to which all are invited – is not long away either. 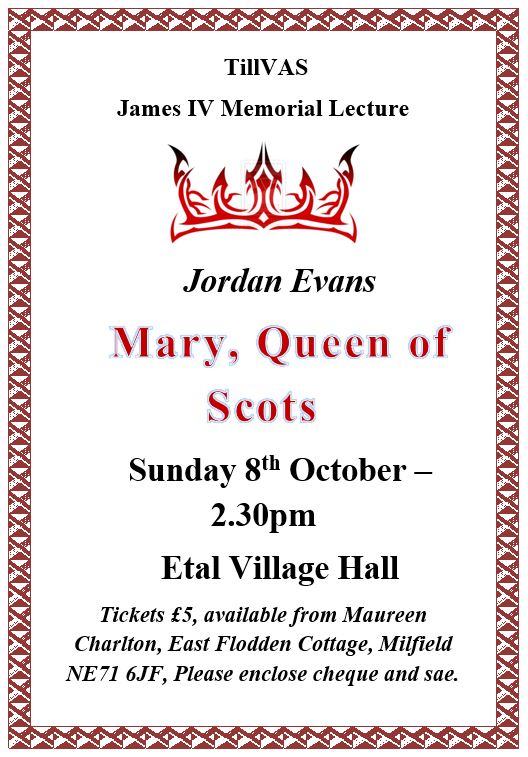 Events this weekend
This weekend is full of archaeological events – we know of at least six. Here are posters for three. 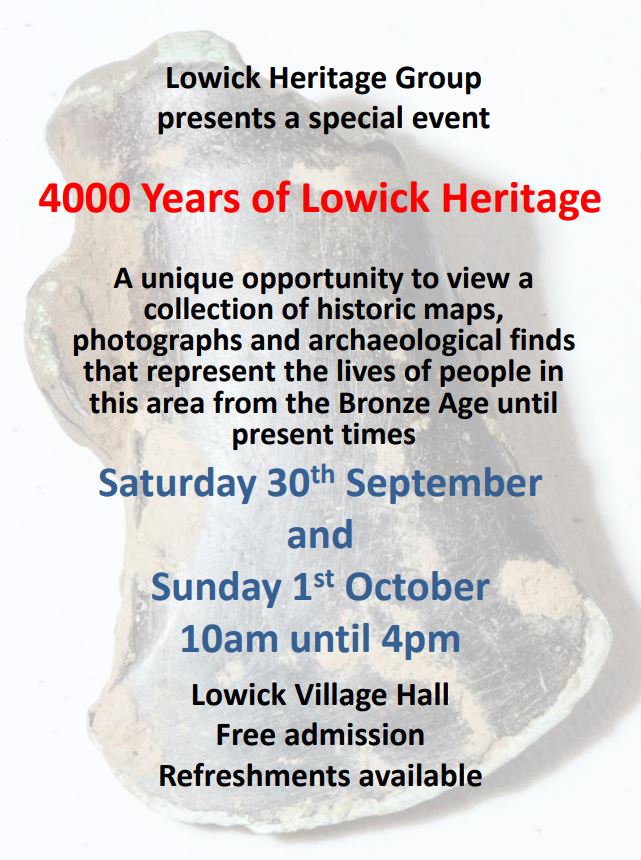 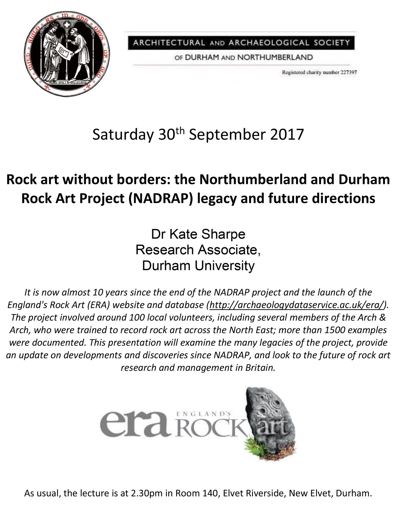 …and finally, though you’ll have to be quick to book a place for this dayschool. 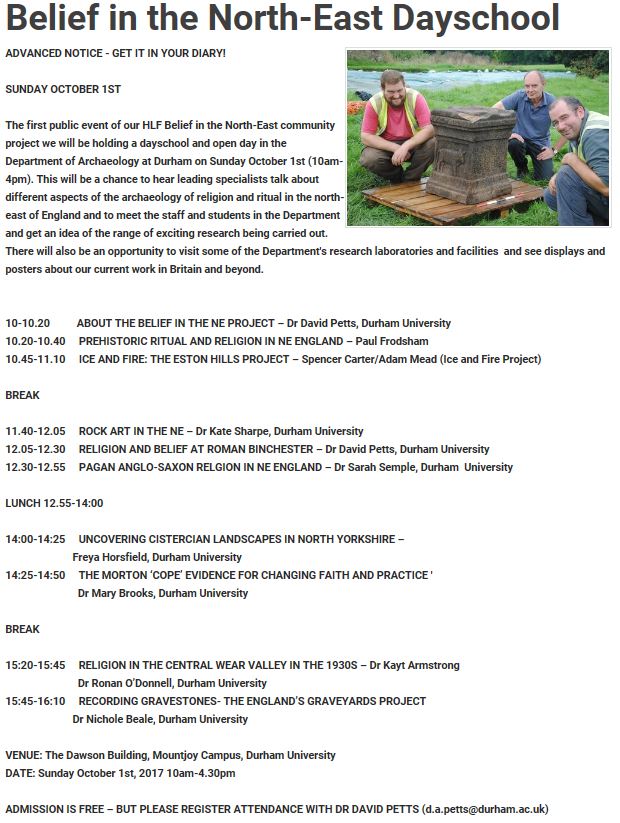 CITiZAN in CBA North-land during 2017
Megan Clement of the Coastal and Intertidal Zone Archaeological Network (CITiZAN) has sent us a brief note of their work this summer as we covered last year. This year the project’s efforts have concentrated, so far, upon Cumbria. She writes;

“Two events were hosted in Cumbria during the Festival of British Archaeology on the 16th and 17th July, led by CITiZAN North in partnership with Morecambe Bay Partnership. These were CITiZAN app workshops which involved a basic guided walk around a local area whilst updating and adding new records to the CITiZAN dataset. The two sites chosen were Roa Island near Barrow-in-Furness and Bardsea near Ulverston. Several new sites were recording including Rampside Navigation Light, a number of shipwrecks at Roa and anti-tank and anti-glider defences were recorded at Bardsea. In all 10 people attended across the two events and were trained in recording the app and identifying archaeology on the coast and in the intertidal zone.

If you are interested in reading more about the workshop at Roa Island, there is a blog which can be found here. We will be returning to Roa Island in November 2017 as some significant new features were identified and need to have a more in-depth survey carried out.” 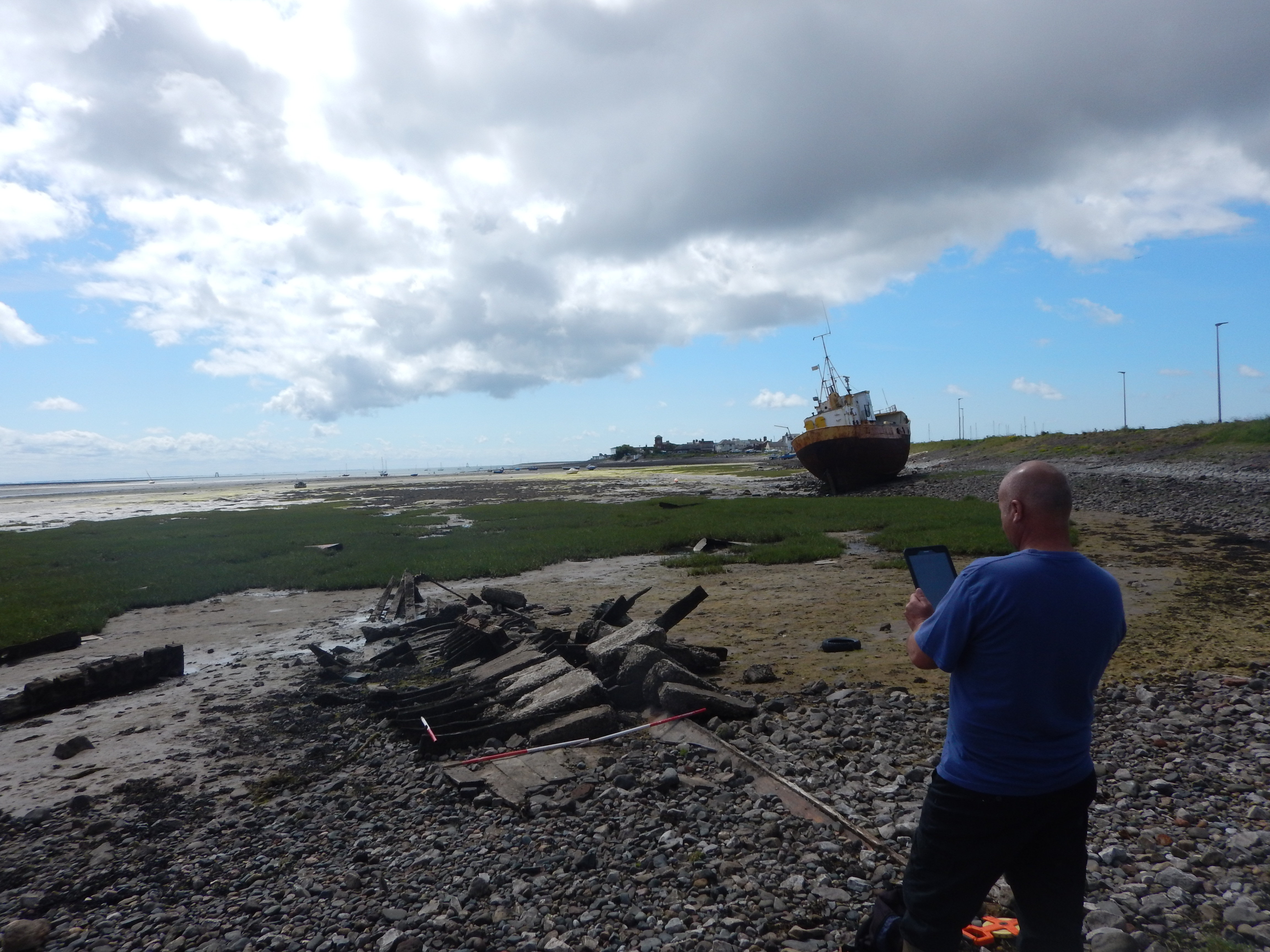 A volunteer recording a shipwreck at Roa Island causeway (© CITiZAN)

Megan also writes that there are further training events to come if you are interested;

“There is one in Tyneside and one in Cumbria coming up in October. These are:

Come join CITiZAN at the Old Low Light Heritage Centre, in North Shields (Fish Quay NE30 1JA) for an app workshop in how to rapidly record at risk archaeology on the coast. Join us for a short talk and tutorial on the app, a leisurely walk down the north bank of the Tyne recording archaeology. The event is free but places have to be booked here.

Join CITiZAN North and Morecambe Bay Partnership at Roa Island, near Barrow-in-Furness to make a permanent archaeological record the remains of a jetty and slipway identified during a workshop in July. These features appear to be part of the former slipway to access Piel Island and part of Piel pier used for travel to Belfast and Douglas. The event is free but places have to be booked for this also.”

Now Spring 2016 seems to have arrived why not spring into archaeological action this month?

Other talks cover the Medieval elsewhere across CBA North-land with Furness Abbey in the southwest of our region covered by the Appleby Archaeological Group [Appleby], though looking further westward again next week, and the week after that a Teesside Archaeological Society talk will deal with Durham University excavations of a castle in Wales,

..and then again other talks cover the area from the lowlands to the hills. Take your pick, attend your own local group meetings and why not something else as well? Our list of things known to us for April is below, but feel free to let us know of any more that you know about or would like to publicise. Details for each of the local groups can be found in our Local Societies and Groups page of the website.

Tickets can now be booked for the 2016 County Durham Archaeology Day which will be on Saturday March 12th, 2016.

If you would like to book tickets please fill in the form and return it as soon as possible after Monday February 22nd when the tickets go on sale. Please pay by cheque made out to “Durham County Council”.

The 2016 lectures of the Border Archaeological Society can be found in our regular Events page. They begin for 2016 on Monday next week, 1 February, at the Berwick Parish Centre (opposite Berwick Barracks) at 7.30pm in Berwick. They are also listed for you below as well;

Contact details for the group, including their website, can be found in our Local Societies and Groups page.

Here are some details for upcoming excavations, please see contact details at the end of the email if you are interested!

The two community Archaeology Projects described below are part of the Heart of Teesdale Landscape Partnership scheme and are to be undertaken under the aegis of the Architectural and Archaeological Society of Durham and Northumberland.  Each one will be managed by staff from an appointed professional archaeological contractor who will supervise the volunteer workforce (maximum of 20 places for each).   Final discussions about the precise dates are underway but both projects will take place in the period late September – end October.

The village of Brignall is one of many settlements that underwent a significant reduction in size and prosperity in the later medieval period. What are thought to be traces of former buildings and tofts have been identified on aerial photographs immediately south of the present village. There are a few fields bounded by ditches, but much of the area is disturbed with no set pattern, and no trace of house platforms. At the time of the Domesday survey, Brignall was composed of 12 carucates of land, all waste, but the village must have been of some importance in 1265 to have been granted an annual and weekly market. There were 4 mills in the village in 1712.

The project will consist of geophysical survey followed by targeted trenching to clarify the nature and extent of the remains of the medieval village.  Volunteers can be involved in both elements of the project and will receive training in archaeological excavation, survey, recording and interpretation techniques.

Field research by 2000 identified four ‘panels’ of Rock Art at the western edge of Hawkesley Hill, a few miles north-west of Barnard Castle .  The motifs consist variously of cups, rings, grooves, isolated peck marks, and other more heavily eroded features some of which may actually be of natural origin.  There are also a number of earth-fast boulders nearby.

The project will entail the detailed recording of the visible Rock Art features and a search for additional examples in the vicinity both by surface inspection and by excavation.  An area around each of the principal rock outcrops bearing Rock Art will be de-turfed and excavated in order to establish if there are other potentially contemporary archaeological phenomena nearby.  Training in archaeological excavation, survey, recording and interpretation techniques.