CBA North News
Some more information for you with notices of future events – in particular on Tuesday next week whether your interests are in Constantinople or in Cumbria. We aim to provide as much archaeological information as we can to you. If you are seeing this and not a CBA North member why not join us or let us know of any archaeological events you are running?

More news and information next week – enjoy the Heritage Open Days weekend in the meantime.

The North West Regional Research Framework
Mike Nevell and Rachael Reader send us notice of a series of events in connection with the North West Regional Research Framework – CBA North Committee are involved in this project, as well as parallel North East one, on your behalf. Contributions from members and local groups in Cumbria, or other north western interests, are particularly welcomed.

CBA North Committee have reviewed our progress to the original North West Archaeological Research Framework which our sister organisation CBA North West produced; feel free to let us know your thoughts on how we are doing well against the targets set of us.

There is still time for you to book your free space on the Early Medieval and Later Medieval period review workshop, for the North West Regional Research Framework for the Historic Environment Update Project (NWRRF for short) and become one of the first to influence the knowledge and direction of this significant project.

NWRRF is designed to provide an overview of current archaeological knowledge in the North West of England and to identify where the most significant gaps lie and how this may best be addressed. The North West region covers the counties of Cheshire, Cumbria, Greater Manchester, Lancashire and Merseyside, and contains the Lake District National Park.

Funded by Historic England, this is a two year project has been designed to update and widen the scope of the original North West Regional Research Framework project which concluded in 2007. This endeavour is being coordinated jointly by the University of Salford’s Centre for Applied Archaeology, ALGAO North West, CBA North West. You can keep up to date or get involved with the project either by regularly checking the latest blogs at  https://archaeologynorthwest.wordpress.com/about/ or by following @cbanorthwest on twitter or visiting the CBA North West facebook pages or the Centre for Applied Archaeology facebook pages.

Our workshop availabilities are;

If you are interested in contributing your knowledge at one or more of these workshops please contact Penny Dargan-Makin (p.r.d.dargan-makin@salford.ac.uk) asap to reserve your place. Once your place has been confirmed I will email you with the period chapter review, the maps, bibliographies, and the research objectives to become familiar with in preparation for the workshop.

Constantinople’s water
The Newcomen Society is a national society interested in the history of engineering and technology. Unsurprisingly there is a regional branch in the north east with particular interests in our region. They hold a regular series of talks – some of which are occasionally more archaeological, with this first one they open their series this season. 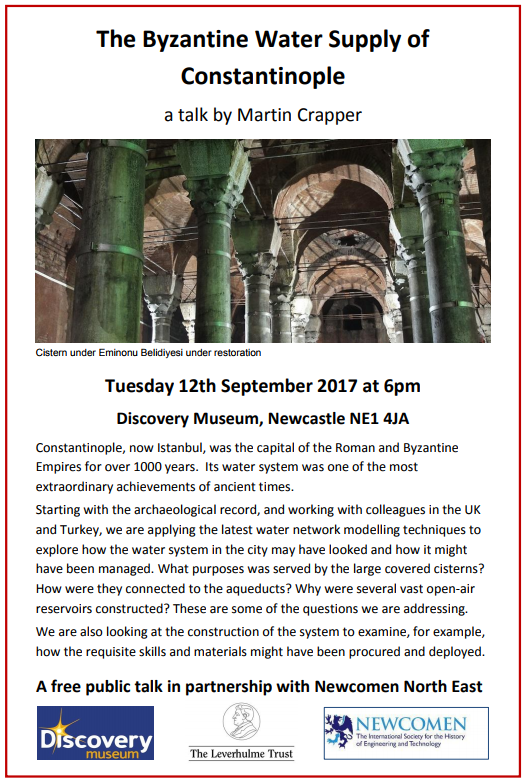 Details of the regional branch’s more archaeological talks will be added to our Events page on the website soon, though we already have a poster for their November talk which we’ll seen out nearer the time.

[Though the Cumberland and Westmorland Antiquarian and Archaeological Society are not a CBA North member, we’ve been passed details by Professor Stringer of the forthcoming 150th Anniversary of the society, so see – and enjoy the links of – that below].

As you may know, the Cumberland and Westmorland Antiquarian and Archaeological Society is celebrating its 150th Anniversary this year. We have a full programme of events appropriate to such a commemoration, and are naturally keen to ensure the widest possible publicity. The Society would therefore be most grateful if you felt it to be appropriate to post on your website a link to our Anniversary webpage. The URL is http://cumbriapast.com/cgi-bin/ms/main.pl?action=150year.

I should add that, as part of our Anniversary celebrations, the Society has digitised its Transactions, accessible on the Archaeological Data Service website at http://archaeologydataservice.ac.uk/archives/view/cumberland/. This may likewise be of
interest to your members, and I hope that you can also draw it to their attention.

Transactions of the Cumberland and Westmorland Antiquarian and Archaeological Society