CBA North News
This week sees a number of events across the CBA North region. There are events in Berwick (this evening), Newcastle and Appleby (Wednesday and Thursday evenings respectively) on a range of project and sites inside and outside of our area, from groups inside and outside of our network. There is plenty to take your choice from, and more again to come soon as news to you. If you would like to submit anything of your local groups recent activities or plans for the summer please let us know.

Lost Lives, New Voices: Unlocking the stories of the Scottish soldiers at the Battle of Dunbar 1650
Richard Annis, Senior Archaeologist at Archaeological Services Durham University, writes to us giving us a foretaste of his Berwick lecture to the Border Archaeological Society [BAS in our events listing] tonight and whose results will appear in a forthcoming book and exhibition on these soldiers. 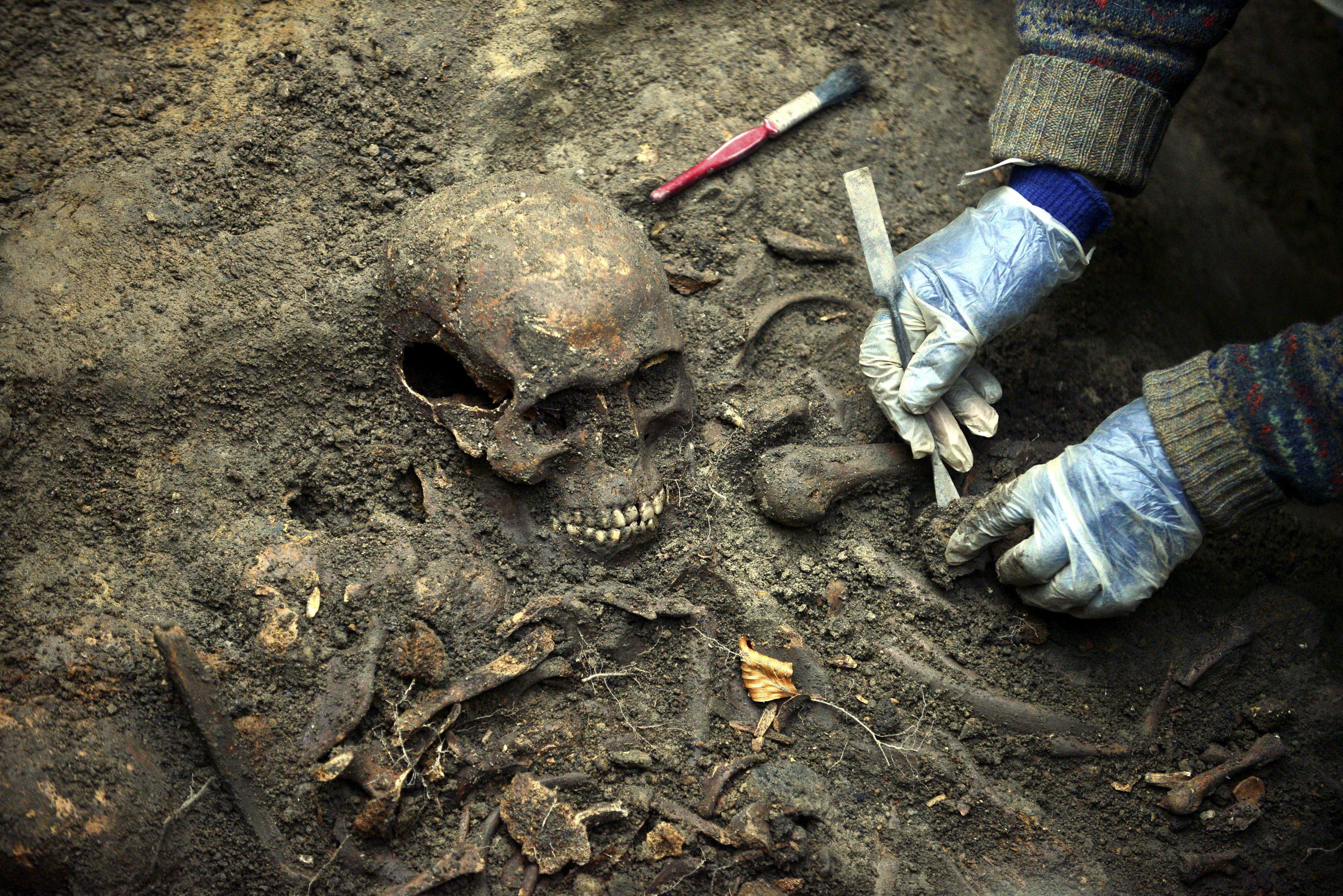 Janet at work; a photo by North News for Durham University

Richard writes;
“In November 2013, human bones were found during building work at Durham’s Palace Green. The excavation that followed found the skeletons of 28 young men in two mass graves. A long and painstaking archaeological project showed that they were some of over 1600 Scottish prisoners who lost their lives at Durham after the Battle of Dunbar in 1650. 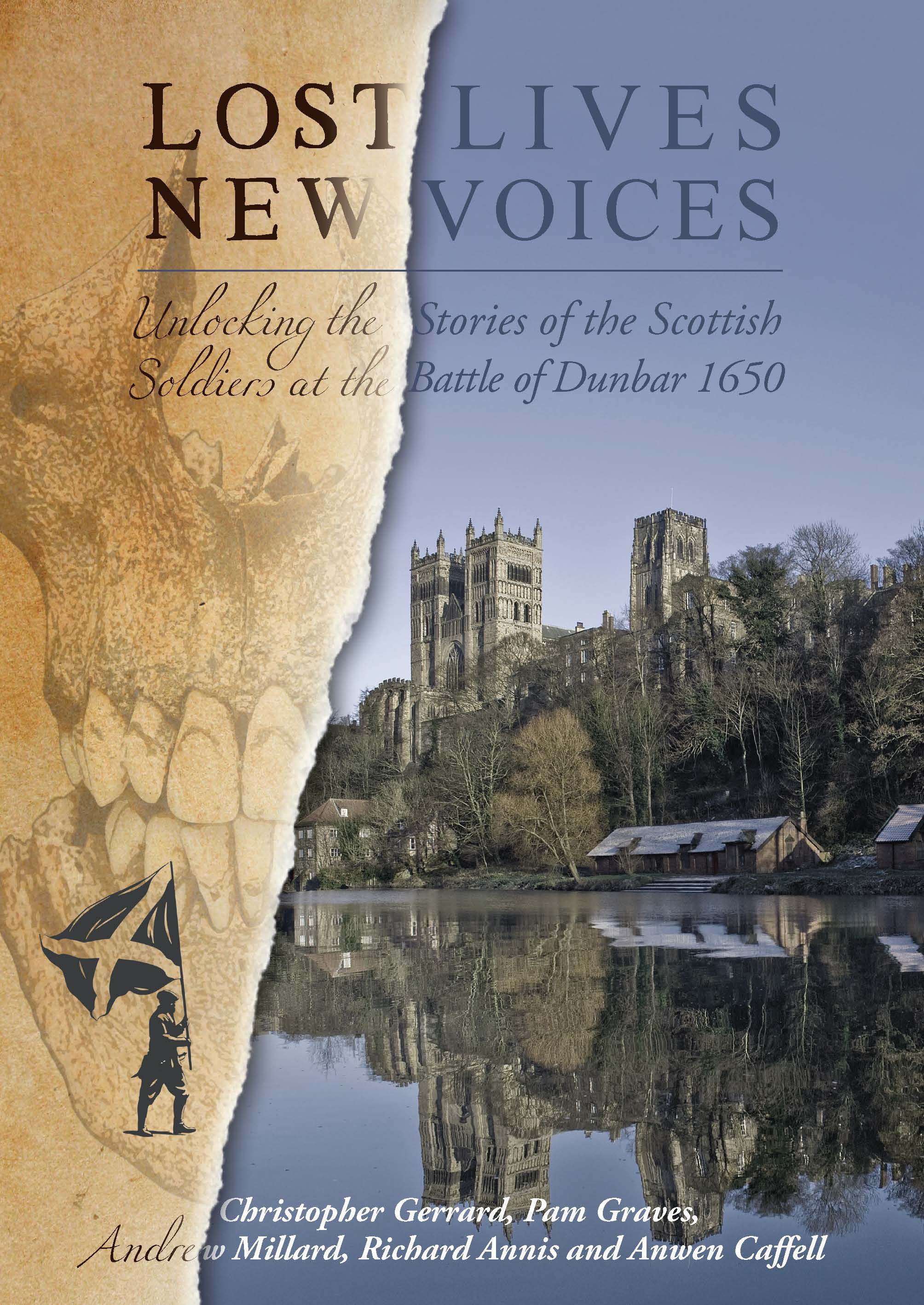 “A new book, to be published this June, tells their story; their lives before the battle, how they came to Durham, how they died, and how they came to have disappeared from view for over 360 years. These were ordinary people, caught up in extraordinary events. As a result of the project, we know more about them than any comparable group from 17th-century Scotland. The story also looks at some of their fellow prisoners; men who survived their captivity and regained their freedom. Some went on to new lives, unimaginable to them before the battle that changed everything, in new landscapes on the edge of the known world. 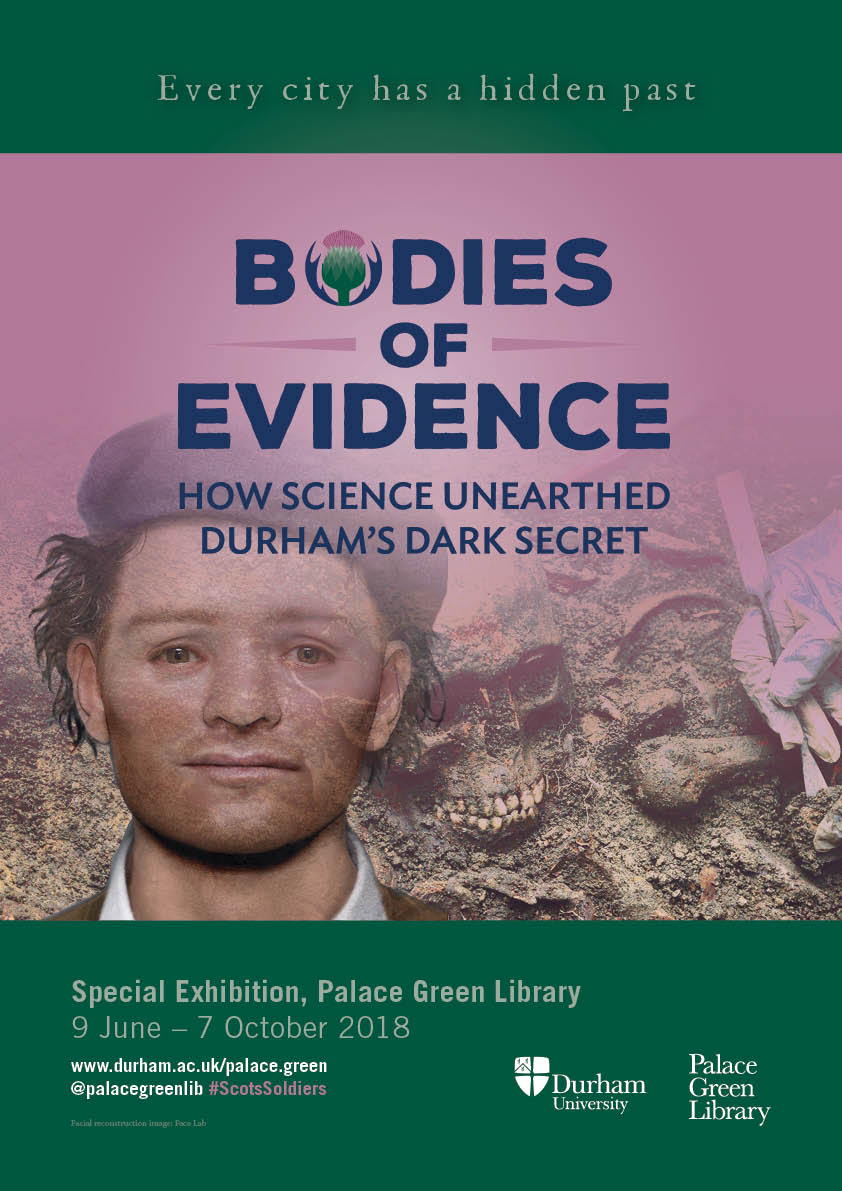 “The exhibition Bodies of Evidence: How Science Unearthed Durham’s Dark Secret will be told in a major exhibition at Palace Green Library. This will run from 9th June to 7th October 2018, and covers the history, the archaeology and the science that underpinned the project”.

For further information on this multifaceted project, Members and Followers can read more on the Scottish Soldiers blog and see recent facial reconstruction work, putting the practices as also described in a previous BAS talk, a Youtube video.

Wednesday and Thursday’s lectures
On Wednesday, the 11th, our group member the Northumberland Archaeological Group will hear an update on The Peregrini Project: Excavations on Lindisfarne from Richard Carlton of The Archaeological Practice in their monthly Newcastle meeting.

On Thursday, the 12th, in Appleby our group the Appleby Archaeology Group will also hear of The Late Iron Age royal site at Stanwick, North Yorkshire: new perspectives by Professor Colin Haselgrove of Leicester University. At both meetings visitors are most welcome to attend. Details as to the venues and times of all these meetings can be found online through our Local Societies and Groups page of our website here.

Archaeology and the small finds of North-East England

A quick reminder that there is still time to book a place at this conference covered in our last email to you. If you would like to attend please follow this link or see  http://www.aasdn.org.uk/NEarch18.htm for further details.

CBA North News
We are delighted to announce the first of the ‘big’ conferences in CBA North region to you as Archaeology and the small finds of North-East England. This is one that we are jointly supporting with the Finds Research Group, our group member the Architectural and Archaeological Society of Durham and Northumberland as well as Durham University.

Below are details of the programme which covers all periods between the Anglo-Saxon and the 19th century, across much of our region from Coquetdale to Teesside (and just over into Yarm) where specifically named and more besides, this conference promises to be a most interesting and fully packed day. Details on how to book a discounted place as a CBA North member are given below, clicking on the posters will take you to the online booking page.

In case you would like to forward this information onto others, please use the links in the left-hand portion of this email or you can send on the link http://www.aasdn.org.uk/NEarch18.htm.

Archaeology and the small finds of North-East England 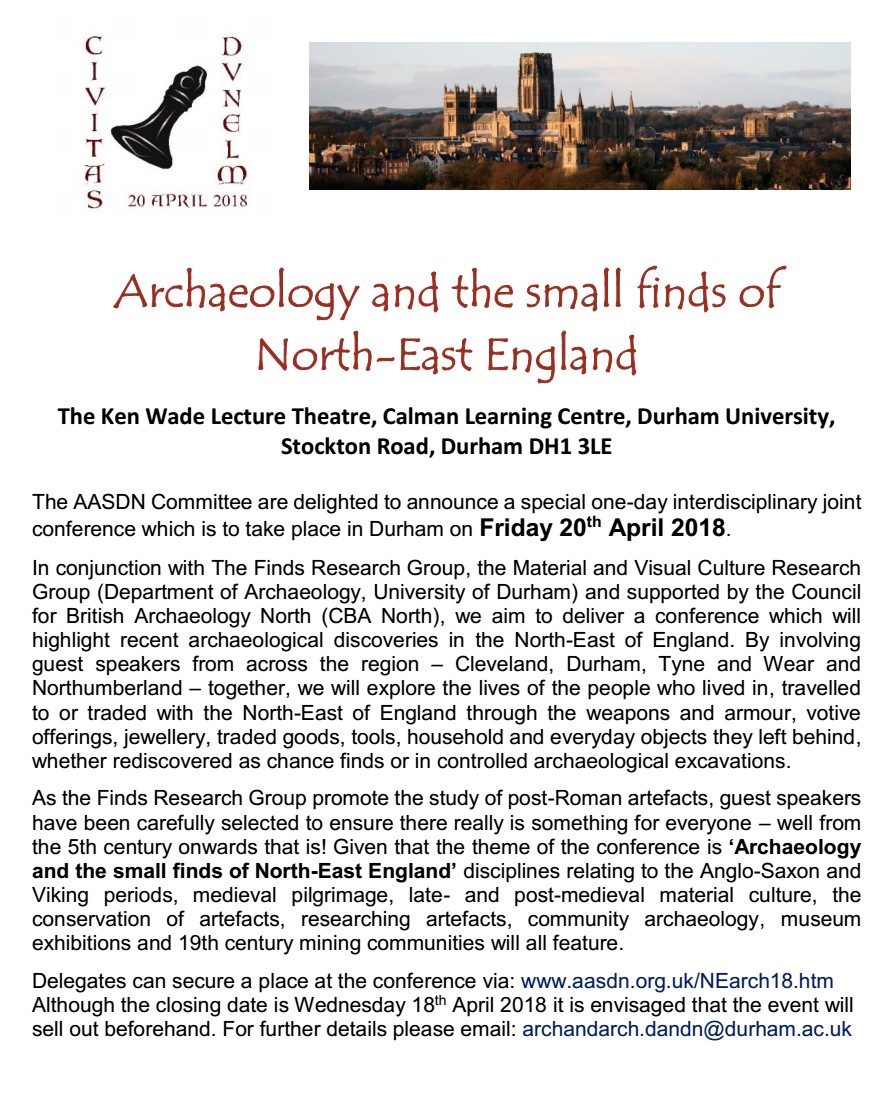 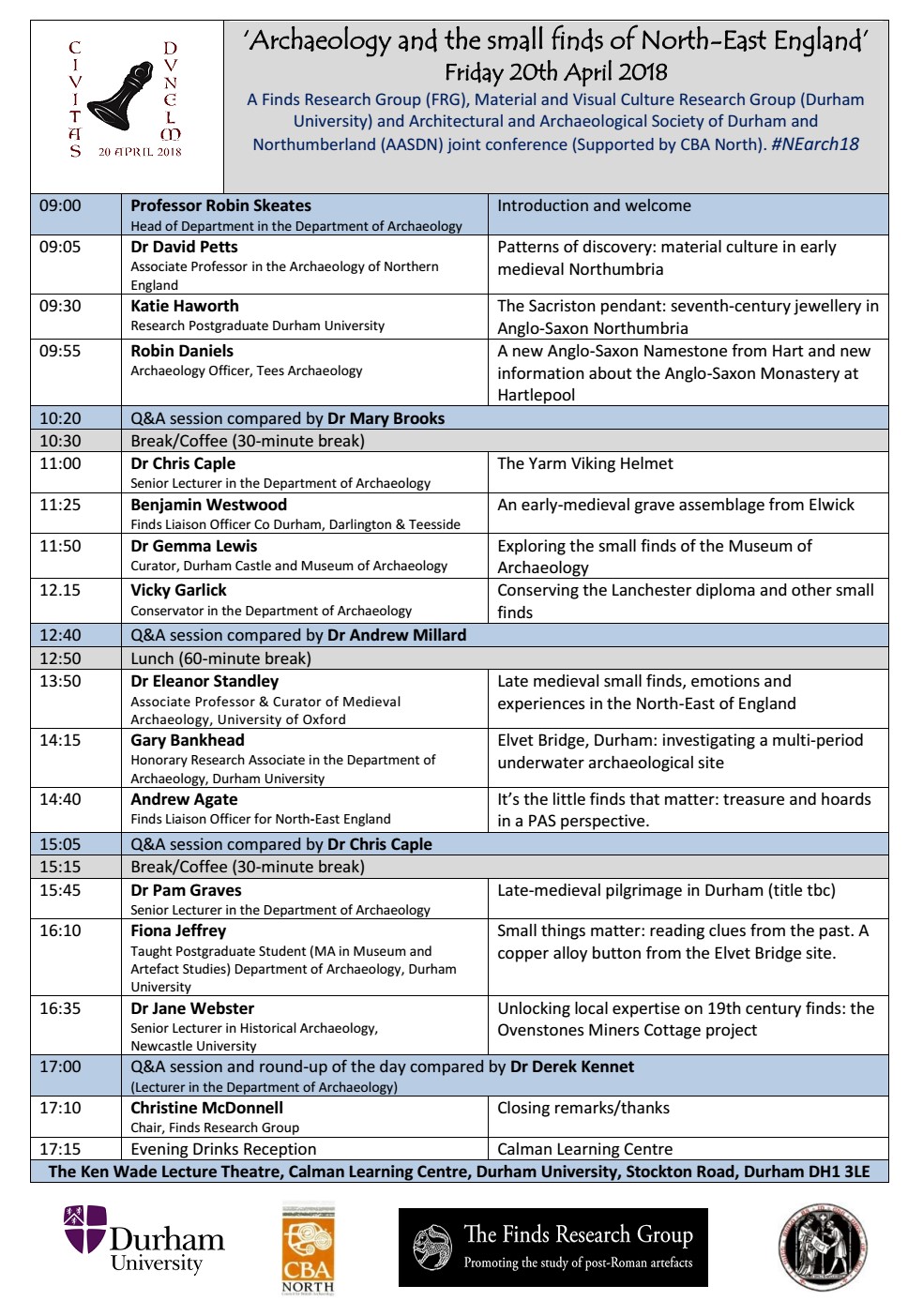 Various CBA North Committee members will be there, with various discounted books for sale from £2 to £20 on various topics as well, so feel free to have a word with us or at any other time.

Further details on our co-partners for this conference can be found through the various links below;

– The Finds Research Group promotes  the study of artefacts from archaeological sites dating from the post-Roman period onwards. It is well-known, even outside finds circles, for producing many datasheets summarising particular classes of objects – some of which can now be downloaded from their website.

– Durham University, and indeed its archaeology department, is no stranger to appearing in CBA North’s materials over many years. Current information on the department can be found online here.

– our group member the Architectural and Archaeological Society of Durham and Northumberland will be already familiar to you as we’ve announced their various lectures in the past. As a follow-on from the conference on the following day their regular meeting is also given over to a finds-based theme; Dr Eleanor Standley will be giving the lecture Spinning yarns and skinning rabbits in the later Medieval period: new contributions to the archaeology of religion, sexuality and daily life.

CBA National’s Community Archaeology Survey
Readers will recall our last email carried the news of, and link to, a survey of community archaeology. The deadline for this survey has now been extended to Sunday 8 April 2018. Here is the link again in case you have yet to fill in the survey, or can send it to someone else,  https://www.surveymonkey.co.uk/r/CBA_Community_archaeology_2018. Please fill in this survey if you have the time!