CBA North News
This is the last email to our Members and Followers of 2017; we also complete our long-running alphabet of archaeology in this email as well with the letters X, Y and Z.

For both the X and Z we’ve a hint of things to come in 2018 and a note for when to expect our first email of 2018 as CBA North has a bit of a break for New Year. Our Y’s note some recent happenings for Yorkshire – one of our CBA regions to our south, but also (through various interests) overlapping also with our own.

X’s in CBA North: a hint of things to come
We’ve a list of at least XLIX local archaeological group meetings across the CBA North region (for those that don’t do Roman numerals this is 49). In the list we have X’s in a lecture dealing with DNA in X (and Y) chromosomes as well as mystery X’s as well with dates decided by groups, but topics and speakers to be confirmed later. As ever it looks to be a fascinating set of events.

Yorkshire news and organisations
The CBA North region as you all know is a huge area which covers all of Cumbria, Northumberland and Durham, as well as the districts that made up the previous Cleveland as well as Tyne and Wear areas. In our Constitution these areas are fully defined as they now are and include portions of the two Yorkshire-based National Parks. Members will likely remember, perhaps more than most, of previous boundary changes. Indeed much pre-1974 was in the North and West Ridings of Yorkshire.

As such we have there are a number of pieces of Yorkshire-based news.

Members with friends and families in the southeast of our region may be interested to know of the launch of a Moors & Valleys Young Archaeologists Club in February 2018. This will be based at The Moors National Park Centre, Danby, and is going to run activities across North Yorkshire and Teesside. 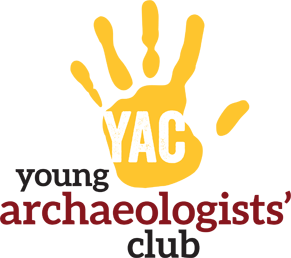 The club is going to be open to everyone aged from 8 to 16 and looking to get involved in all sorts of activities, including demonstrations, activities, visiting and investigating sites in the future.

If you are interested in further details, please contact Maria-Elena Calderon on 01439 772 700 or email her through this link.

Z’s: a break for CBA North emails
CBA North emails will be having a short break – albeit till the 2nd January. We’ll be sending you our Chair’s message for 2018 and details of local group meetings all across our region. If you’ve any last minute additions for that list – let us know!

CBA North Committee are full of busy behind the scenes for later in 2018, though we’ll also be catching up on sleep so ZZZs end our alphabet of archaeology for 2017!

Like Loading...
CBA North News
This is the one of the last emails to our Members and Followers of 2017; we hope that you have been able to attend and take part in the many events and activities that we have covered this year. We already have some material ready to go for 2018, but please feel to contribute things. Season’s Greetings from CBA North Committee
As this is our last email before Christmas, as in previous years, send you a seasonal picture of a historical nature. This year’s picture – kindly provided by courtesy of Northumberland National Park – is the stone carving of the three kings attending Christ which is located in Kirknewton Church in north Northumberland and is thought 12th century in date. 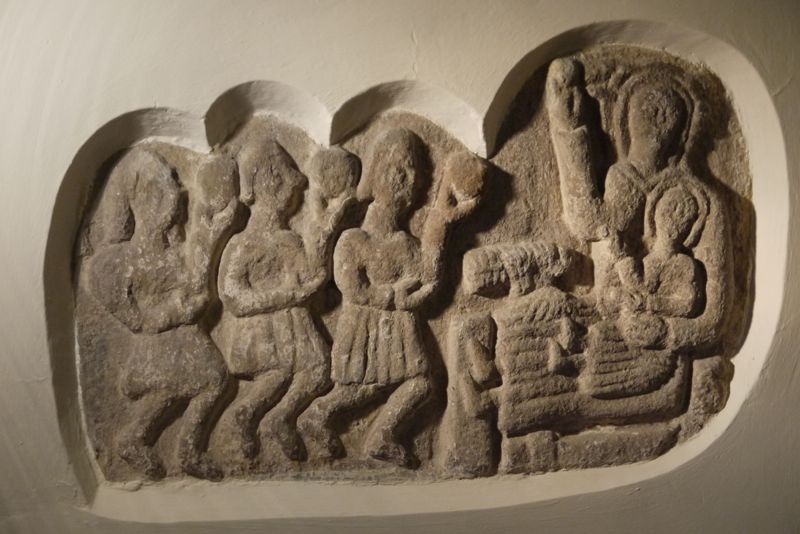 Contributions are welcome for such a picture this time next year if you would like to submit something. Nonetheless we send to all CBA North’s Members and Followers our seasonal greetings and our best wishes for 2018! Have a Merry Christmas and a Happy New Year as you see fit!

CBA North News
CBA North and the region are full of archaeological busy.

We are in the process of setting up things for 2018, but hope to send out summaries of things that have happened in 2017 later this month as well. If you would like to contribute something, such as to publicise your own group’s events of this year or to come, in our emails to our members and/or for our Events website events, please feel free to send us those details to cbanorth@archaeologyuk.org.

December’s Events
Events continue across the CBA North region this month. Here is a quick list of those archaeological ones that we know of still to come.

Details of the groups, venues and times can be found through our Local Societies and Groups page in case they are unfamiliar to you.

Hadrian’s Wall: an archaeological site or an artistic muse?
Here is the poster and some details of one of those events kindly provided by Josie McChrystal, Secretary of the Border Archaeological Society. 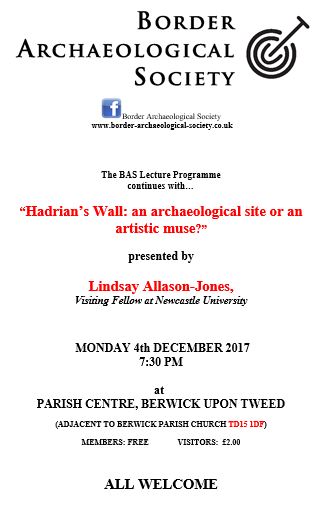 This Christmas miscellany explores Hadrian’s Wall through poetry, films, cartoons, music and literature, discovering how each generation sees the Wall in their own way.  Using archives and her personal involvement in the arts first as Director of Archaeological Museums for Newcastle University and then as Director of its Centre for Interdisciplinary Artefact Studies, Lindsay Allason-Jones will introduce you to some familiar, some unusual and some distinctly odd material, and reveal aspects of the Wall which may surprise you.

The lecture will take place at Berwick Parish (Holy Trinity) Church Hall, off The Parade, Berwick TD15 1DF, commencing at 7.30pm. It is free for BAS members but there is a charge of £2 for visitors.

The latest copy of The Bulletin will be available on the evening, together with the opportunity to renew your BAS membership.